The "Great Barrington Declaration" is a declaration by some scientists that argues for opening up the economy as a priority during the COVID19 pandemic.  I disagree with this viewpoint, believing that the response to COVID19 should be more nuanced.  However, whatever my personal views I was shocked to discover that Google is shadow banning the Great Barrington Declaration, they are decreasing its visibility on searches and increasing the visibility of articles that oppose it.

Screen captures of searches on Bing, Google, Duck Duck Go and Yahoo are shown below (click on the image for higher definition): 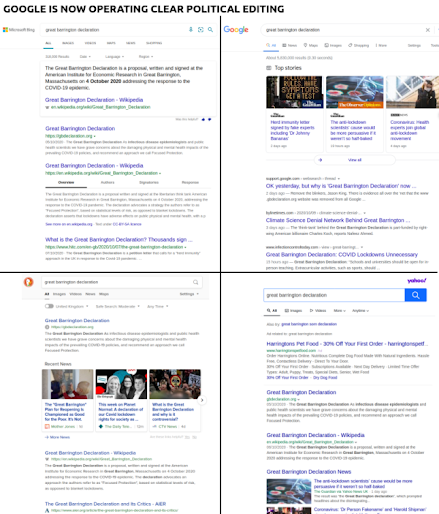 Notice that the Google search fails to even show sites such as Wikipedia that describe the Great Barrington Declaration but gives prominence to those that criticise it.

Google has become a newspaper, like the Guardian or New York Times.  It is a publishing operation that promulgates the views of its publisher.

The temporary solution for you and me is to switch our browsers from Google to Duck Duck Go, Bing or Yahoo.  The long term solution for the UK is to set up a National Firewall (complete with satellite internet jamming) and regulate search engines to be impartial.